Thank you to everyone who participated in the election for the 2021-2023 FCAAP Board of Directors!

Congratulations to the newly elected Board members below who will serve as Chapter Representatives in Regions 1, 3, 5 and Subspecialist at Large. Newly-elected Representatives will be inducted to the Board on Sunday, September 5, 2021, during The Future of Pediatric Practice 2021! Virtual tickets for the event are still available here.

Thank you to our outgoing Representatives for their service to FCAAP and continued efforts on behalf of Florida’s children. 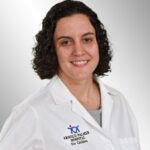 Dr. Walters has been a member of the FCAAP since 2016. She is currently on the Gun Violence Prevention Task force in which she has been working in collaboration with community gun violence organizations to bring gun safety education to residency programs. She is a co-chair for the new Central Florida Pediatric Advocacy Coalition. This group developed after collaboration with other FCAAP members at the AAP Advocacy Conference in 2021.  She along with her co-chairs have developed residency legislative advocacy education and are working on larger scale state advocacy efforts. Dr. Walters is also a media representative for Orlando Health, discussing child health issues with various news organizations.

Dr. Walters wants to be the FCAAP Region 1 Representative to become more involved with the organization and to support the chapter’s state child advocacy efforts. She plans to continue advocating for child health issues including, but not limited to, gun violence prevention measures, inclusive care for the LGBTQ community, improved to mental health resources, and improved vaccination rates and access. Finally, she looks forward to finding ways to encourage pediatric residents to become involved in the FCAAP state advocacy efforts. 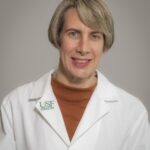 Jennifer Takagishi, MD is a General Academic Pediatrician in Tampa, Florida and division chief at the University of South Florida and holds the rank of Professor of Pediatrics. She graduated from Wellesley College and Tufts University School of Medicine and completed her pediatric residency at Duke. She then worked for four years at the Long Island College Hospital in Brooklyn before moving to Tampa in 2000.  Since arrival, Dr. Takagishi has been the medical director of a busy teaching practice serving predominantly low income, minority families and directs the site’s Reach Out and Read program. In addition, she is the Title V medical director for the Tampa Bay region as well as the Statewide and Hillsborough County medical director for both the Children’s Multidisciplinary Assessment Team and Medical Foster Care programs. All these programs serve some of the most vulnerable children in the state and highlight the multidisciplinary team approach that she believes is vital to caring for children and families.

Dr. Takagishi has been a member of the AAP since residency, served on the AAP Executive Committee of the Council on Early Childhood from 2012-2020, and has written or reviewed multiple policies and reports. She also volunteers as Florida’s Early Childhood Champion, spreading the word about needed care for children in their most formative years. Dr. Takagishi is also serving on the planning committee for the upcoming Trauma Informed Pediatric Practice course in Orlando. Dr. Takagishi has represented Children’s Medical Services as part of the Medicaid committee with the chapter for several years, fighting for improved reimbursement for pediatric generalists and specialists caring for children with complex needs.

Dr. Takagishi plans to work for improved reimbursement for primary and specialty care, as well as for additional payment for services needed to lessen the effects from Social Determinants of Health such as poverty and racism. Working in tandem with other specialists and beginning from the earliest moments of children’s lives are paramount to improving the health of our children and families and enhancing the medical care pediatric providers give to the children who entrust us with their futures. 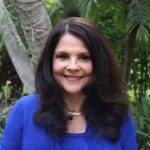 I am the current Region 5 representative to the FCAAP Board of Directors as well as the Co-Chair of the Gun Violence Prevention Task Force. After graduating from UM-Miller School of Medicine, I completed my residency at Children’s Hospital of Los Angeles and then a Fellowship in Ambulatory Pediatrics at LAC-USC Medical Center. When I returned to Miami in 1987, I worked in the Pediatric Emergency room at JMH before going into private practice with ABC Pediatrics for 12 years. When this practice disbanded in 2000, I began my own private practice, Beachside Pediatrics, with Sandy Lieberman, M.D. in Bay Harbor Islands. Over the past 12 years I have also served as a preceptor to several UM-JMH pediatric residents in my office and as a part-time attending in the outpatient clinic at UM-JMH Ambulatory Care Clinic.

I have found my time as an active member of the FCAAP incredibly rewarding and only regret that I did not become an active member sooner.  Besides serving on the Board of Directors and Co-Chair of the GVPTF, I have served on the Legislative, Advocacy and Membership committees, and was honored to receive an AAP 2020 Special Achievement Award. I am amazed by the dedication of those on the Board and the various committees to improving the lives of the children of Florida and feel fortunate to have been an active part of this organization for the past several years. This organization has done so much to advocate for legislation that benefits Florida’s children and I have been thrilled to have contributed to these important issues through my participation. I am hopeful that through our work we will be able to advance some meaningful gun violence prevention legislation such as tightening the Safe Storage laws, universal background checks and banning assault weapons/high-capacity magazines. I look forward to continuing my involvement in this organization, whether on committees or as a continuing member of the Board of Directors. 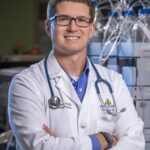 Dr. Morrison is currently the co-chair of the FCAAP Early Career Physicians. He graduated with an MD and PhD from the University of Nebraska Medical Center. Afterwards, he completed his residency and fellowship training in Pediatric Hospital Medicine at Johns Hopkins All Children’s Hospital (JHACH) in St. Petersburg, FL. He currently practices as a pediatric hospitalist at JHACH and has an active clinical and translational research program that focuses on children with tracheostomy and other medical complexities, hospital readmissions, and predictive modeling. In addition to his own academic career, Dr. Morrison is the Director of the Center for Clinical/Translational Research Training, Education, Engagement, and Mentorship and serves as the Scholarship Rotation Director for JHACH Pediatric Residency Program. Enjoys serving as a research mentor for residents with the JHACH and University of South Florida Pediatric Residency Programs. Dr. Morrison is also a husband, father of three children, and avid fan of Florida’s beaches.

Dr. Morrison has been involved with the American Academy of Pediatrics and the FCAAP since early in his residency training. Initially, he served as the District X Program Delegate, where he co-authored several resolutions and initiated a week-long advocacy event at his home institution. He was subsequently elected by his peers to the position of District X District Coordinator, where he organized regional advocacy efforts of pediatric trainees. In 2018, Dr. Morrison was selected as the Subspecialty Fellowship Trainee Delegate for Hospital Medicine to the AAP Section on Pediatric Trainees. In 2019, Dr. Morrison was appointed to his current position as co-chair of the FCAAP Early Career Physician committee. In this role, he has worked with his co-chair and committee colleagues to assess the needs of early career physicians, co-developed an informational resource addressing these needs, and served as the early career physician representative to the FCAAP Legislative Subcommittee. As the Pediatrician Subspecialist At Large Representative, Dr. Morrison will advocate for improved access to mental health resources, universal screening for unmet social needs in inpatient and outpatient clinical settings, and COVID-19 vaccination for all eligible children.